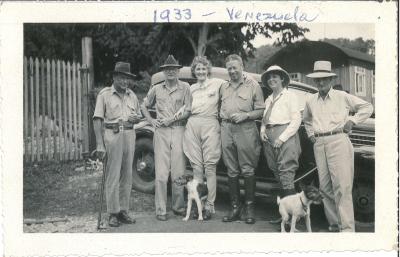 Around the World: The Global Curiosities of Carl Otto Lindberg

Around the World: The Global Curiosities of Carl Otto Lindberg explores the life of a Swedish-American mining engineer. Born near Stockholm, Carl Otto Lindberg (1879 - 1960) immigrated to the United States as a young man, after attending the Royal Swedish War Academy. After graduating from the Michigan College of Mines in 1906, he entered the mining business. Lindberg spent the height of his career as the head of the Gold Fields American Development Company. While centered in New York City, Lindberg served as an industrial consultant and global ambassador for mining by traveling to sites in South America, Asia, Africa, and Australia.

This exhibition highlights Lindberg's collection of artifacts from around the world, organizing them geographically to reveal the scope of his travels. Having acted as markers of colonialism, gift-giving, souvenir collecting, and the creation of an "ambassador's" global identity, the curious collection of Carl Otto Lindberg reminds viewers of the complex, changing roles of objects throughout time.

Watch a video tour of the exhibition here: https://youtu.be/OLzwLTjZKIE

This exhibition was curated by Olivia Armandroff, curatorial intern and Ph.D. student at the University of Southern California. It was generously supported by The Carl M. Lindberg Family Foundation, Inc.