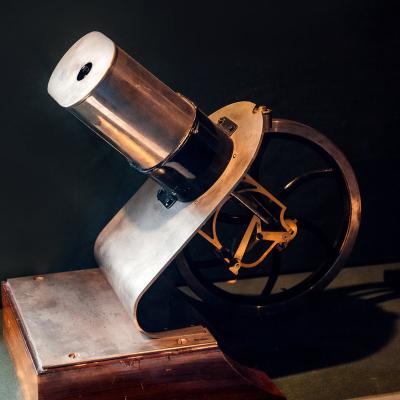 Gravitational energy, solar steam engines, and tidal power … sounds like science fiction, right? Think again! Swedish-American inventor, John Ericsson, was ahead of his time when he researched such theories in the mid to late 1800s. Ericsson saw the growing amount of coal needed to fuel the industrial nations and explored limitless energy sources.

While not all Ericsson’s ideas made it off the drawing board, his experiments with solar power were among the most successful. Ericsson invented this solar-powered steam engine, for example, to reduce the use of coal.  This prototype, invented in 1870, uses a focusing lens to concentrate light onto a boiler. Focusing the light boils the water, creates steam, and allows the engine to create mechanical energy. Inventors had already experimented with such machines, but Ericsson’s focusing lens was a new balance between energy and cost. Ericsson's prototypes influenced later solar technology, but the inventor died before they could be mass-produced.

This object not currently on display.

The American Swedish Historical Museum explores cultural identity through the story of Swedes and Scandinavians in America. While this mission seems specific to the last three-hundred years, our museum actually looks more than a thousand years into the past! That is, we also tell the stories of the Viking explorers who were the first Europeans to discover the Americas more than 1,000 years ago.

While we often consider the Vikings as raiders, they were also crafty merchants and brilliant navigators. Their explorers sailed across much of the known world, trading with Islamic caliphates past the Caspian Sea, raiding along the Mediterranean, and reaching the Americas more than 500 years before the voyages of Christopher Columbus! Led by Leif Erikson, these explorers founded settlements in modern-day Greenland and Canada. These settlements lasted until the sixteenth century, linking the ages before and after the rest of Europe knew of the New World.

This sword, although it has no connection with Vikings in the New World, offers a lens for understanding war in medieval Scandinavia. While spears and shields were the most common Viking weapons, only the wealthiest warriors carried swords. 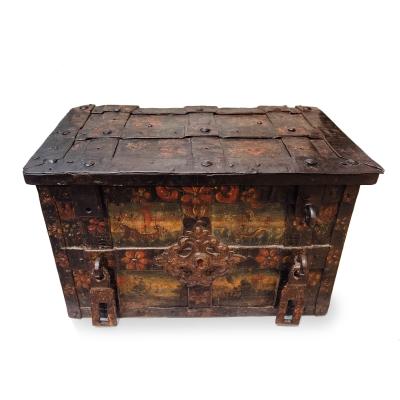 Sinnick Broer, a Finn, brought this painted iron strongbox to the New Sweden Colony. Broer traveled to the Delaware River in 1656 with his wife, daughter, and two sons aboard the Mercurius—Sweden’s last expedition to the colony.  When the settlers arrived in the New World, they discovered that the Dutch had conquered Sweden's settlements.  Despite the change in leadership, Broer’s family flourished in the Americas. His sons settled in what is today Delaware and New Jersey. This chest passed through the family of Broer Sinnickson until they donated it to the American Swedish Historical Museum in 1981. 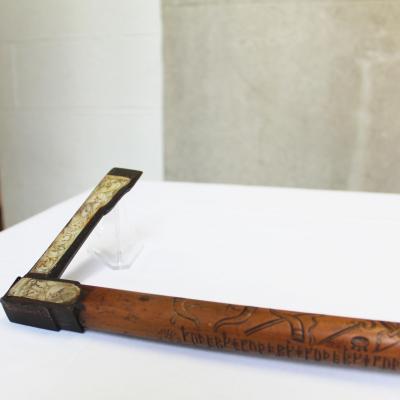 Although similar in design to medieval weapons, the Swedish cane axe had many uses outside of the battlefield.  Village leaders in regions such as Dalarna carried these axes as status markers.  Often inscribed with local laws, such axes were passed to successors and represented the passing of legitimate authority.  Swedish miners also carried similar cane axes (bergmansyxa) as prospecting tools.  By tapping on rocks with their axes, miners could hear the sounds created by different ores.

After a decline in traditional usage, cane axes saw a renaissance by the late 1600s. Young noblemen at Uppsala University wielded these axes not in battle or mining but instead as fashionable accessories.  This particular axe—with its ornate mother-of-pearl veneer and runic inscriptions—was likely part of this rebirth.  The runes form a calendar that tracks the annual cycle of holidays, Sundays, and lunar movement. 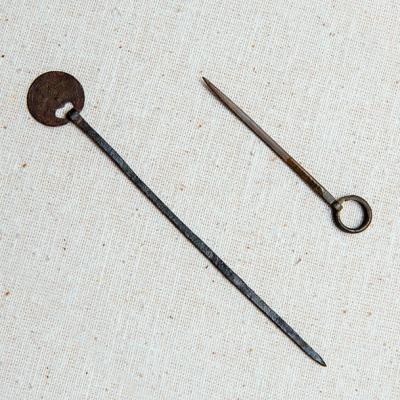 Just as the Viking sword in the ASHM's collection helps us to understand warfare in medieval Scandinavia, these bronze pins help us to understand clothing in Viking settlements. Such pins were simple ways to secure one's cloak, a rectangular piece of fabric that offered easy protection against the wind and cold. Archaeologists unearthed these cloak pins in Ireland, showing the extent to which the Norsemen visited and, in many cases, settled in lands around the Atlantic Ocean. 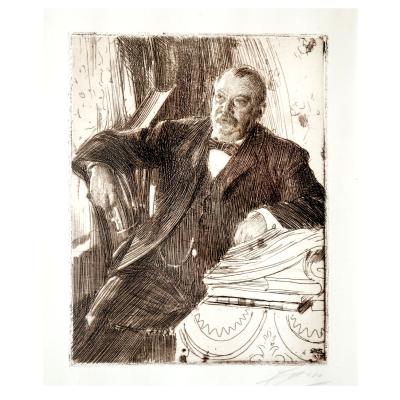 Anders Zorn, after a portrait by Zorn
Ink on paper
Sweden
1899
Gift in memory of Mr. Harry C.W.S. deBrun

The American Swedish Historical Museum is one of only six museums in the United States with a collection of Anders Zorn's work. Zorn—born in Mora, Sweden but a frequent visitor to the United States and France—trained as a painter in Stockholm. Zorn is especially renowned for creating around 550 portraits of individuals such as United States presidents and Swedish royalty.  By the 1880s, though, Zorn was drawn to the revival of copperplate etching. Zorn based many of his etchings on earlier portraits.

The American Swedish Historical Museum possesses a number of Zorn’s well-known etchings of American presidents Grover Cleveland, Theodore Roosevelt, and Howard Taft, among a number of other figures. Central to Zorn's etchings are diagonal shading and cross-hatchings that emphasize the human form. As seen in the ASHM's collection of Zorn's work, Zorn's favorite images to reproduce were those of the women who often modeled for him!