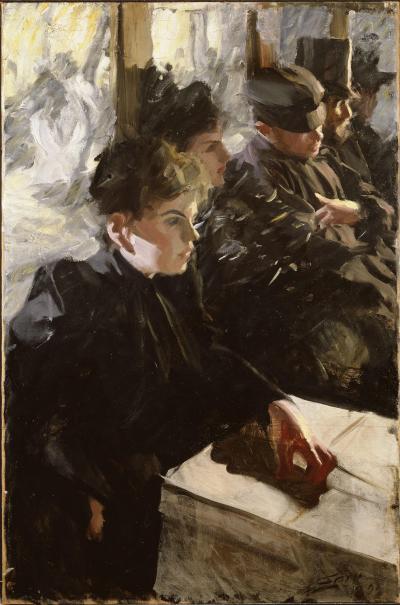 2018 has been a year of momentous elections in Sweden and America. As newly-elected representatives decide upon issues of immigration, social policies, and globalism, we reflect upon the histories of progressivism and human rights that have pushed both countries onto the world stage today.

2019 marks a centenary in the fight for female suffrage in the United State and Sweden, both of whom drafted laws granting women the right to vote in 1919. While this year marked the end of the long-fought constitutional battles of the suffragists, women still could not vote in America until 1920 with the ratification of the 19th Amendment or until 1921 in Sweden with the confirmation of sweeping constitutional reforms.

The struggle for suffrage in both nations is often subject to reductionism—or the attempt to reduce a complex event to a single, simplifying cause. It is commonly argued that the surge of reformed voting laws around the world stemmed from the First World War. Scholars have noted that women’s wartime responsibilities in governments, munitions factories, and (sometimes) the battlefield showed men their potential in modern society and the need for constitutional changes. Such arguments, however, do not capture the full story of women’s rights, especially in the Nordic region.

Finland, for example, enfranchised women well-before the outbreak of World War One in 1914. This nation so recently liberated from Russian rule has the dual honors of being the first European country to enfranchise women (1905) and the first to elect female members of parliament (19 women were elected to the newly-formed Suomen eduskuntav in 1907). Norway and Denmark-Iceland were not long to follow, granting women the right to vote in 1907 and 1915, respectively. Sweden—at the time a relatively socially-conservative nation—was the last in the region to enfranchise women and was the only Nordic nation to do so after the First World War.

The global catastrophe of World War One marked a break with the past and the opportunity for nations to implement sweeping changes, but it was clearly not the root-cause for Nordic suffrage. Indeed, influential Swedish women had been campaigning for the right to vote for about a century before 1919. Celebrated socialites such Ellen Key, Selma Lagerlof, and Fredrika Bremer had lobbied domestically and internationally for women’s rights and formed organizations vital for advancing female equality. The association founded in Fredrika Bremer’s name was particularly influential in carrying on Bremer’s activism after her death and into the 20th century, when it engaged with a variety of women-focused issues.

Such organizations were vital for connecting Swedish activists with suffragists in other nations, and global events such as the World’s Fairs further pronounced these efforts. Stockholm’s 1897 World’s Fair, in particular, provided Swedish women with an international platform from which they could petition for increased domestic rights. While women were represented in artistic, handicraft, and industrial exhibitions at the Fair, the Nordic Women’s Congress convened at the newly-anointed Swedish Women’s National Association to discuss cooperation across international lines. Such inclusions helped to strengthen the vital dialogues between various women’s rights organizations while also popularizing the movement with middle-class Swedish women. Mobilization among more women saw the membership of these organizations skyrocketing. The Swedish National Association for Women’s Suffrage, for example, expanded from 3,500 members in 1904 to upwards of 17,000 members in 1913 across 200 branches, enough momentum to pass reforms through a coalition of Liberals and Social Democrats.

Of course, the suffragettes’ victories in 1919 did not mark the end of women’s rights organizations in Sweden. As explored within ASHM’s special exhibition—From the Heart, Made by Hand—associations continued to advance equality across multiple avenues. Craft organizations, for example, engaged with questions of female empowerment in a society allowing them the ability to enter virtually any career path. Led by figures such as Dr. Hanna Rydh, these craft associations highlighted the historic role of Nordic craftswomen over the centuries. While the modern women could enter any path, Rydh argued, women had always driven the Swedish household and, by providing for their own livelihood, had never truly been inferior to men.

While the fight for true, full equality continues in both Sweden and America today, 1919 marked a great triumph in a centuries-long struggle. Their victories were global victories, and we honor them today through memory and action. ASHM works to remember women’s rights organizations working throughout Swedish history with its collections and galleries. Action comes from voting and ensuring that our voices continue the fight for all equality today.

related exhibition
From the Heart, Made by Hand: Treasures from the Women of Sweden