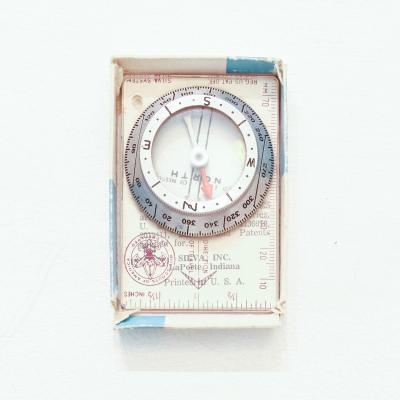 Björn Kjellström’s motto, printed onto his business card, was: “Magnetism had shaped my life.” While not the inventor of orienteering itself, Björn was the co-inventor of the modern compass and likely the person most responsible for the sport’s global spread. We might even say that Björn Kjellström has shaped our appreciation for magnetism as much as it shaped him.

Orienteering had developed from Swedish military exercises in the late 1800s. These practices taught soldiers to navigate terrain only with their map and compass, which at the time were mounted into wooden boxes. Among the first-known orienteering competitions were those held in May 1893 by the Stockholm city garrison. Norway (at the time part of Sweden) held the first civilian competitions near Oslo in 1897. Its early spread to the broader public was enabled by Swedish and Norwegian industrialization, railroads, and land surveying. Such surveys, in conjunction with inexpensive printing technology such as lithography and subsequent tourist maps, encouraged the availability of maps for public use.

Today, orienteering is a sport requiring use of map and compass to navigate an outdoor course. While variations of orienteering might involve skis, bicycles, or wheelchairs, its typical competitions are on foot and scored so the orienteer with the fastest time wins. Despite the sport’s early popularity in the Nordic region, its global spread was halted by the compass’s limitations. While early orienteers used protractors with their compasses to navigate, the difficulty of using both tools alongside a map meant that precise navigation in the field was challenging. Additionally, the magnetic needles within these “dry” (not liquid-filled) compasses could take about 30 seconds to stabilize. In a timed sport where a few degrees might take one miles off-course, these issues frustrated attempts to popularize the sport amongst amateurs.

The solution came through collaboration between the three Kjellström brothers—Björn, Arvid and Alvar—and inventor Gunnar Tillander. Orienteering was hardly new to the Kjellströms—they had competed on skis as children and had recently started a business selling used compasses and ski equipment. But their breakthrough came in 1928 when Tillander approached the brothers with his prototype for a compass incorporating both protractor and compass into a single instrument. The design, familiar to us today, mounted a rotating compass onto a clear plastic baseplate that allowed for accurate navigation when placed over a map. Tillander’s invention simplified the orienteer’s toolkit while making navigation even more precise.

One Kjellström brother, Björn, supplemented Tillander’s compass with his own invention: a liquid damping chamber for the magnetic needle. By submerging the magnetic needle in a clear liquid (often a clear oil or ethyl alcohol), the time needed for it to stabilize was reduced from about thirty seconds to only four. The liquid also formed a buffer against exterior shocks and vibrations—necessary to orienteers in the field. Tillander and Kjellström’s innovations were vital in improving the accuracy of field compasses, reducing orienteering’s complexity, and increasing the sport’s competitive viability.

With these innovations the Kjellström brothers and Gunnar Tillander formed their company, Silva, in 1932. Silva was instrumental in popularizing orienteering among amateurs, and by 1934, a quarter-million Swedes were active in the sport. Outside of civilian use, Silva’s new field compasses were put to the test in Finland’s Winter War and the Nazi occupation of Norway. Finnish officers credited orienteering with having strengthened Finnish defenses against the Soviet Union in 1939 and 1940. A few years later, Norwegian resistance fighters utilized orienteering and Silva’s liquid-filled compass to combat Nazi soldiers and assist Norwegian civilians escaping to Sweden.  Björn Kjellström himself fought for the Finns and, with his first wife, a Norwegian, provided a safe-house to refugees from Norway.

Björn was orienteering’s most prominent promoter in America. Björn’s early efforts culminated in his 1955 book, Be Expert with Map and Compass, a guide to orienteering that has sold over 500,000 English copies. Björn’s efforts finally began to succeed by the 1960s, a decade that saw the birth of the Delaware Valley Orienteering Foundation, today the largest orienteering club in America, and the popularization of orienteering among the Marine Corps and West Point Academy. In 1971, Kjellström co-founded the United States Orienteering Foundation (USOF). As the USOF’s long-time co-president and president emeritus, he had become the figure most widely associated with orienteering throughout North America.

As stated on his business card, magnetism captivated Kjellström. At his home in Pound Ridge, New York, Kjellström developed this fascination through an enormous collection of historical texts on magnetism and antique compasses from around the world. His collection included 17th century Jesuit texts on magnetism’s applications in theology, ancient Chinese compasses, and dozens of 18th century pocket compasses from France, Austria, and Portugal. Later in his life, Kjellström even traveled to the magnetic North Pole. He delighted in the unlimited freedom enabled by mastering map and compass, often reminding his friends: “Magnetic waves run from pole to pole, coursing right through our bodies, 24 hours a day. And ... they are free!" Björn’s friend and student Christopher Cassone remembers, “Magnetism was always on his lips.”

Björn’s love for orienteering went far beyond magnetism. His daughter Carina notes that Björn loved the slower aspects of orienteering as much as its fast-paced competitions. Even as he became slowed by age and Parkinson’s, Björn’s six-foot-three frame was a daily sight on the trails he developed in the 4,700-acre Ward Pound Ridge Reservation around his home. And today, though Björn Kjellström is no longer with us, his legacy endures in the empowerment and freedom learned when harnessing magnetism with map and compass.

This exhibition is supported by grants from the ASHM Auxiliary, Midsommarklubben, SWEA New Jersey, SWEA Philadelphia, and an anonymous foundation. Support provided by the Philadelphia Cultural Fund. Funding for the American Swedish Historical Museum is supported by a grant from the Pennsylvania Historical and Museum Commission, a state agency funded by the Commonwealth of Pennsylvania.