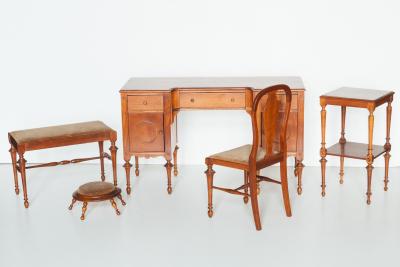 Message Regarding COVID-19 and its Impact on Museum Operations >>

A Turner in Jamestown

Immigration is the story of people and places, but we often forget how diverse these stories are. Instead, we focus on general pictures and the archetypical immigrant’s story as representative of millions of people. Similarly, it is easy to imagine the story of Scandinavian immigration to the United States as always being tied to the American West, envisioning families working their way to Illinois, Minnesota, or even further to the Pacific coast. But this is not the full story of the 2.3 million Scandinavians who came to the United States in the 1800s and early 1900s.

Jamestown is a small town in Chautauqua County in rural New York, less than 30 miles southeast of Lake Erie. In addition to its proximity to the Chautauqua Institution, home of the late-1800s educational movement, Jamestown has the distinctions of having been the second-largest furniture maker in the United States for much of its 200-year history (the largest being Grand Rapids, Michigan) and the highest-proportion Swedish population in the East. These stories are closely intertwined, as Jamestown Swedes provided skilled labor for hundreds of furniture factories between the Civil War and World War One.

Before this, though, Jamestown was “little more than a ragged hole in a gloomy forest wilderness”, as described by settler Obed Edson in 1816. He was not far off—early Jamestown was an isolated lumber village surrounded by primeval pine forests. These ancient trees and the rivers around them were Jamestown’s most valuable resources. Through the mid-1800s, local creeks helped in exporting simple manufactured goods such as wooden pails, tubs, shingles, and scythe handles to outlying river towns. Importing people and products remained challenging due to water currents leading away from Jamestown.

The 1825 opening of the Erie Canal started a new chapter in the town’s commercial history. This vital link between the Hudson River and Lake Erie spurred development throughout New York State, opening isolated villages to new markets and labor. Jamestown capitalized on these connections by importing hardwoods such as black walnut and white oak to supplement its pine furniture industry. Walnut and oak were ideal for cabinet-making, providing an attractive and durable wood grain at an affordable price. With these new imports came better exports, expanding Jamestown’s markets to include cities as far away as St. Louis.

As much as the Erie Canal spurred economic development, railroad connections to New York City in 1860 caused a surge in Jamestown’s population. With the Great Western Railroad, settlers could now travel directly from New York City to Jamestown, where they found quick employment in its many furniture industries. The period after the Civil War was particularly lucrative for Jamestown craftsmen as they attempted to fill the market for furniture caused by wide-scale destruction in the American South.

Swedes and Danes were among the more successful immigrants in Jamestown. With its temperate summers, cold winters, and expansive forests, Chautauqua County was similar to much of southern and central Sweden. Even if they did not ultimately settle in Jamestown, many Swedes simply passed through this town on their journeys west. Many of the Swedes who stayed in Jamestown were from rural areas and already skilled in woodcutting, carpentry, and cabinetmaking.

While Jamestown’s early Swedes were skilled artisans, many also became business leaders. In the 50 years between the Civil War and World War One, Swedes founded at least 75 furniture companies in Jamestown. By 1920, around 75% of all businesses in Jamestown had been founded by Swedes or those of Swedish descent. While many were small and short-lived, others such as the A. C. Norquist Company (1881), Atlas Furniture Company (1882), and Carlson, Bloomquist and Snow (1885) lasted well into the 1900s.

Swedes were drawn to the furniture industry because, unlike other trades, it was relatively inexpensive to begin a small furniture factory. With a national market—including chairs sold to the U.S. Supreme Court—furniture provided upward social and commercial mobility for those who were successful. While Jamestown was predominantly a Swedish town, Danes found success there too. Among the most socially-active citizens of historic Jamestown was Charles Ipson, born in Denmark in 1846 and son of a famed inventor. After achieving success in furniture, Ipson became heavily involved with Jamestown Board of Health and schools.

While the names of factory owners have survived, individual craftspeople have typically vanished. The American Swedish Historical Museum has recently been donated a miniature cherry furniture set and other turnings made by a Jamestown Swede named Oskar Karl Alphonse Andersson, allowing the museum to celebrate the craft and story of Jamestown’s Swedish artisans.

Oskar and three of his brothers immigrated to the United States in the early 1920s when Oskar was in his early forties. The large Andersson family originated in Sweden, but they had lived in Denmark for several years prior to migrating to the United States, where they continued the family profession of wood turning. While the heyday of Jamestown’s furniture industries was receding, turning was still a valued skill in all woodworking trades as it was used to create candlesticks, lamps, legs, spindles, pegs, balusters, and baseball bats.

Oskar’s brothers were especially successful. His younger brother, Ernst, founded a woodturning plant, Andersson Woodturning, in Gardner, MA in the 1940s. Among other accomplishments, Ernst’s plant turned baseball bats for the Boston Red Sox. In celebration of “Gardner Day at Fenwick Park” in 1946, Ernst even turned a giant bat from a telephone pole, which was photographed being held by baseball star Ted Williams. This giant bat is on display at the Baseball Hall of Fame in Cooperstown, New York.

Oskar himself remained in Jamestown, likely working as a turner for one of the many Swedish-owned factories. His miniature furniture pieces were likely part of a larger set used for advertising, based on their remarkable stylistic and technical similarity to Jamestown’s early-20th century furniture. While Oskar’s place of employment remains unknown, these miniature furnishings highlight the skills of a Swedish-trained turner plying his trade in the United States.